Barnabybear wrote:I'm sure thats a good idear but way beyond my skills at this time.

Check out my git (https://github.com/NeuronTech/wifisensors), it has all the code necessary for a local or remote server...

In relation to fet gate capacitance, that's the main issue but with a little imagination I can over come that... a little experimenting this weekend I think...
Mike

Michaelo wrote:Looks interesting... have you determined the set up time for the ESP?

Barnabybear wrote:I don't have a scope so the only way I could think of to test the actual setup time would be to setup a second ESP with a loop taking a GPIO high for slowly increasing perids of time & using that as a trigger untill a stable value is reached.

Tested replacing the PIR with a second ESP, GPIO 2 was used in place of the PIR output running the code below:
Code: Select all//THIS CODE IS NOT PART OF THE SUBJECT OF THIS THREAD
//USED ONLY TO TEST THE DURATION OF TRIGGER NEEDED
//RUN ON A SECOND ESP TO TRIGGER THE FIRST IN PLACE OF A PIR

This could possably be speeded up as
Code: Select allWiFiClient client;  // starts a WiFi client.
& some other lines of code run before
Code: Select alldigitalWrite(holdPin, HIGH);  // sets GPIO 0 to high (this holds CH_PD high even if the PIR output goes low)
I'm not sure how long it takes to set up a WiFi client. If needed, rearranging the code could save this time, weather it makes a significant difference is to be proven. 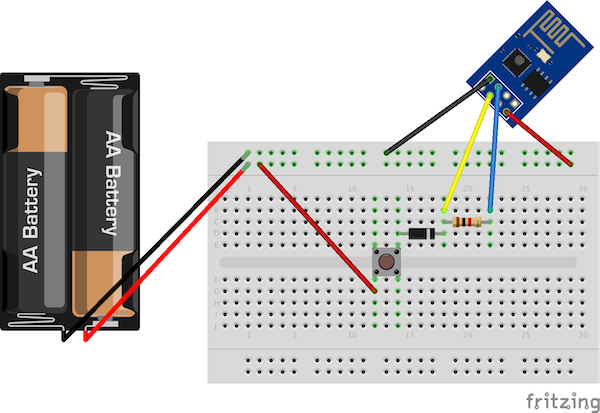 - Wed Aug 19, 2015 4:12 pm #26515 If anyone is as confused by the above post as I was its a way to send a post/get statement at the push of a button to IFTTT or any other site whenever you want to. Follow the links above for the needed code to do so.
Don't know why he chose to post it in this thread . Just couldn't wait I suppose.

Further in it says

The key features are:
Energy efficient
OTA wifi configuration
IFTTT, but in reality you can GET/POST to anywhere

Get you modules here:

Reset is a watchdog reset. These are triggered whe[…]

still prefer btidey solution what about something[…]

The full code is here: #include <Arduino.[…]

Hello! I will grok that the both of you are inde[…]

hello, i've been looking for longtime to do post a[…]

Hello, I don't have any sensor, no capacitor and n[…]

Yeah the problem is definitely not a hardware issu[…]

This forum is titled "Downloading and Instal[…]

you found a solution? Still having this problem wi[…]

I have a project built around an Adafruit Feather […]