Capacitor exploded on my NODEMCU

btidey wrote:A NodeMCU should work OK from 5V up on the external Vin. It feeds the regulator just like the USB (with an isolation schottky). Although some NodeMCU may be able to tolerate higher voltages that will because they have a higher voltage capacitor fitted. It is still not a good idea to feed a linear regulator with a higher voltage than necessary as it causes excessive heat and will drain the battery faster.

If you are having to use a higher voltage then I would suspect that there is something wrong with the boost converter particularly around whether it can supply the peak current requirements of the NodeMCU which can go up to 500mA.

As I said feeding this from 5V may be better idea if this can give a decent current. It will also probably work direct from the battery at least when well charged. The on board regulator fitted is not the best from a drop out viewpoint so that would limit how far the battery voltage can fall.

A SG90 servo should only draw about 300mA when running. This should not cause any difficulty even on the same rail as the NodeMCU. I have several servo applications using MG90 (metal gear equivalent) and they power the servos from same supply with just simple decoupling.

Well, I tested it thoroughly, and NODEMCU just doesn't work with 5V for me. Even when I'm powering it directly from my PSU, which can easily supply 2A. With voltage that low, NODEMCU gets stuck booting half of the time, and the other half it boots, but stays extremely unstable. Try to connect to WiFi - and it's stuck again. I tried this with different NODEMCU's. But I'm not surprised - after all, it is declared explicitly that NODEMCU should be supplied by 7-12 volts via the Vin pin. For example like here: 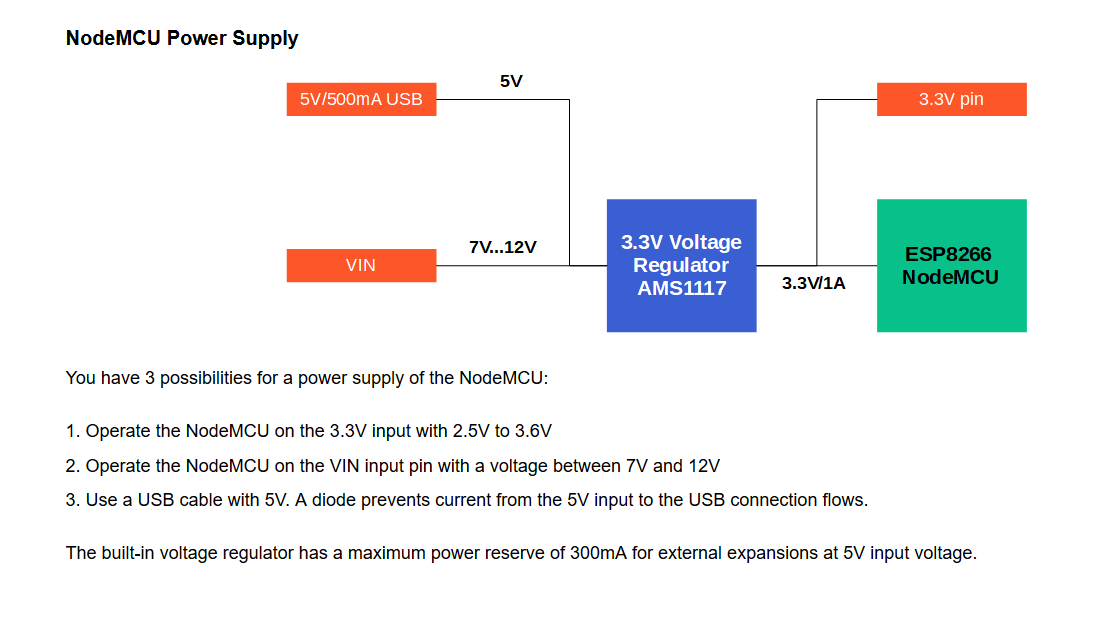 I have been powering my NODEMCU's with as much as 10V and above in many projects running for months on end with no issues... Sure, it may not be very efficient, and the regulator might get a bit warm, but nothing ever failed... or exploded. I mean, if the NODEMCU specifications say it can handle 7-12V, then surely the components of NODEMCU are rated for that.

As for powering it directly from LiPo battery - I don't get how that could possibly work. I mean, ideally, I'd want to supply 3.3V directly to NODEMCU via it's 3V3 pin, without using the onboard regulator. That would be ideal. But the LiPo can discharge down to 3.5V. Finding a LDO with less than 0.2V drop that can supply 500mA with even higher peaks - well, I did my search, but I was unable to find anything affordable and purchasable on Ebay/Aliexpress (other suppliers don't ship to where I live). If you know anything, I'm all ears.

In any case, back to the original question - how can I prevent the SG90 from exploding stuff on my NODEMCU? Is there any solution more reliable than a capacitor? I kind of don't trust them.

schufti wrote:I'm pretty sure that the servo is not related to the incident. It is the "we don't know what we are doing but we sell cheap" mentality that resulted in the capacitor rated 6.3V what some parts may withstand, others ---

I believe you. But I am 100% sure that the servo is related in some way. Because everything was running perfectly, until the moment when I hit the enter key to send the command over REPL to move the servo. And that is EXACTLY when the explosion occurred. It can't be a coincidence.

The reality is that this pin is connected direct to the input to the regulator that drops down to 3.3V. You should be able to verify that by using a meter to see a direct connection.

If the board is stable when powered from the USB then it would be stable if externally powered from 5V. As you don't experience that then I would check with a meter that you are truly getting 5V at the board itself. If there is some resistance in the connection then it might be causing a voltage drop that is being offset by supplying a higher voltage.

NodeMCU units are manufactured by lots of different outfits. The fact that yours had a 6.3V capacitor indicates it wasn't a full spec item capable of withstanding higher voltages on Vin.

As to why it exploded when you operated the servo, one theory would be that the change in load temporarily raised the 8V feed to the board and took the capacitor stress further beyond its limits.

Either way you should not operate a board with a 6.3V capacitor and more than that feeding it. Either replace with one with a higher rating or find out why feeding a 5V in is not giving stable operation.
Reply
Return to Hardware Specific

You need to provide some information about the rel[…]

The difference could be down to the capacitor that[…]

Otherwise: - check the voltage in real life, if th[…]

If I understand your problem correctly, you would[…]

As the title describes, I am not getting the expec[…]

GPIO16 is different to the other GPIO pins. It do[…]

Hello all, I am completey noob and after ages rea[…]

Well, that's embarrassing for me, but thanks! We[…]

Perhaps this topic can get you going ? :idea:

is it just the softserial that does not work? can […]

If you are convinced you found a bug feel free to […]

You are trying to connect to a secure server and I[…]

Well, seems I need to do this myself. Attached is […]