A place to put your YouTube video that is ESP8266 related.
Reply

- Fri Oct 05, 2018 1:11 pm #78498 I know it was risky to fly drone with everything mounted in our garden in near darkness.
But I wanted to know if drone plus servo payload drop mechanism plus drop payload really can fly.
The total weight was 98.8g, a little less than planned because I removed see-through plastic for back LED.
I had to fixate the drone camera, I superglued it as well in vertical position, needed for controlled drops.
The ESP01s superglued to drone back will get a lot of fresh air from nearby back right drone blade.

Flights were successful, but I had to take over control during autostart take off phase (the drone normally lifts off until 1m above ground, and then remains there) in giving full power upward flight. I did two flights, both times drone lifted above our house roof top, perhaps 8m high. Difficult to keep drone under control in near darkness, bat was possible. The green front and red back LED could be seen nicely 8m down from ground, I never noticed them during daylight flights.

This is drone after the flights, lost a blade and the lipo that was loose in drone trunk on last landing, but found the lipo and still have >20 spare blades: 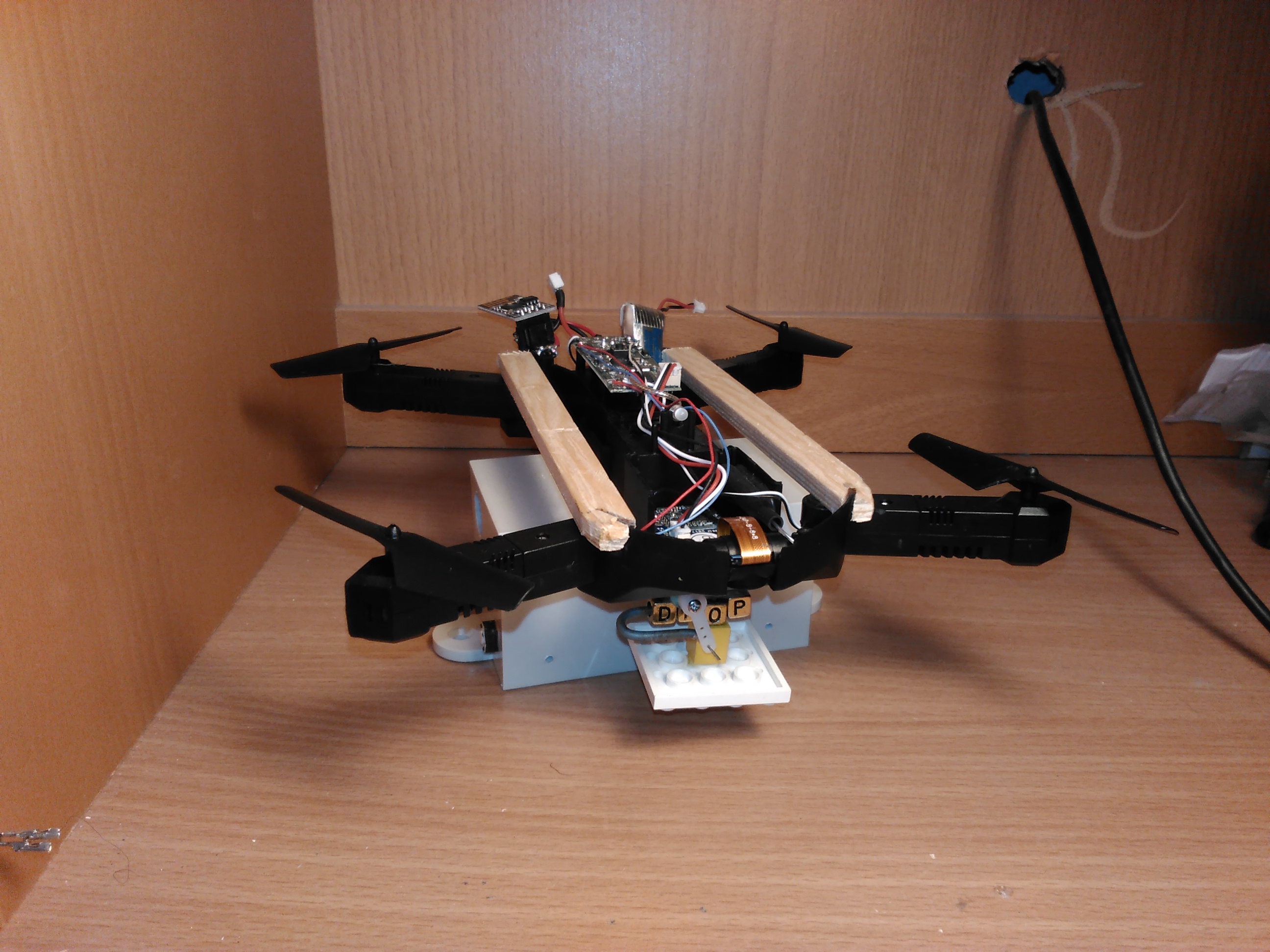 QuickFix wrote:Hey, this is the ESP8266 video's forum: we want to see some flicks!

will be recorded tomorrow, showing targeting, payload drop, fall and (hopefully) target hit.
Until then you can view slowmo videos of payload test drop in previous postings of this thread.

Just completed 18.5cm diameter target for tomorrow ...
(perhaps superglue is not best choice for fixation of paper on wood -- but I do everything with superglue) 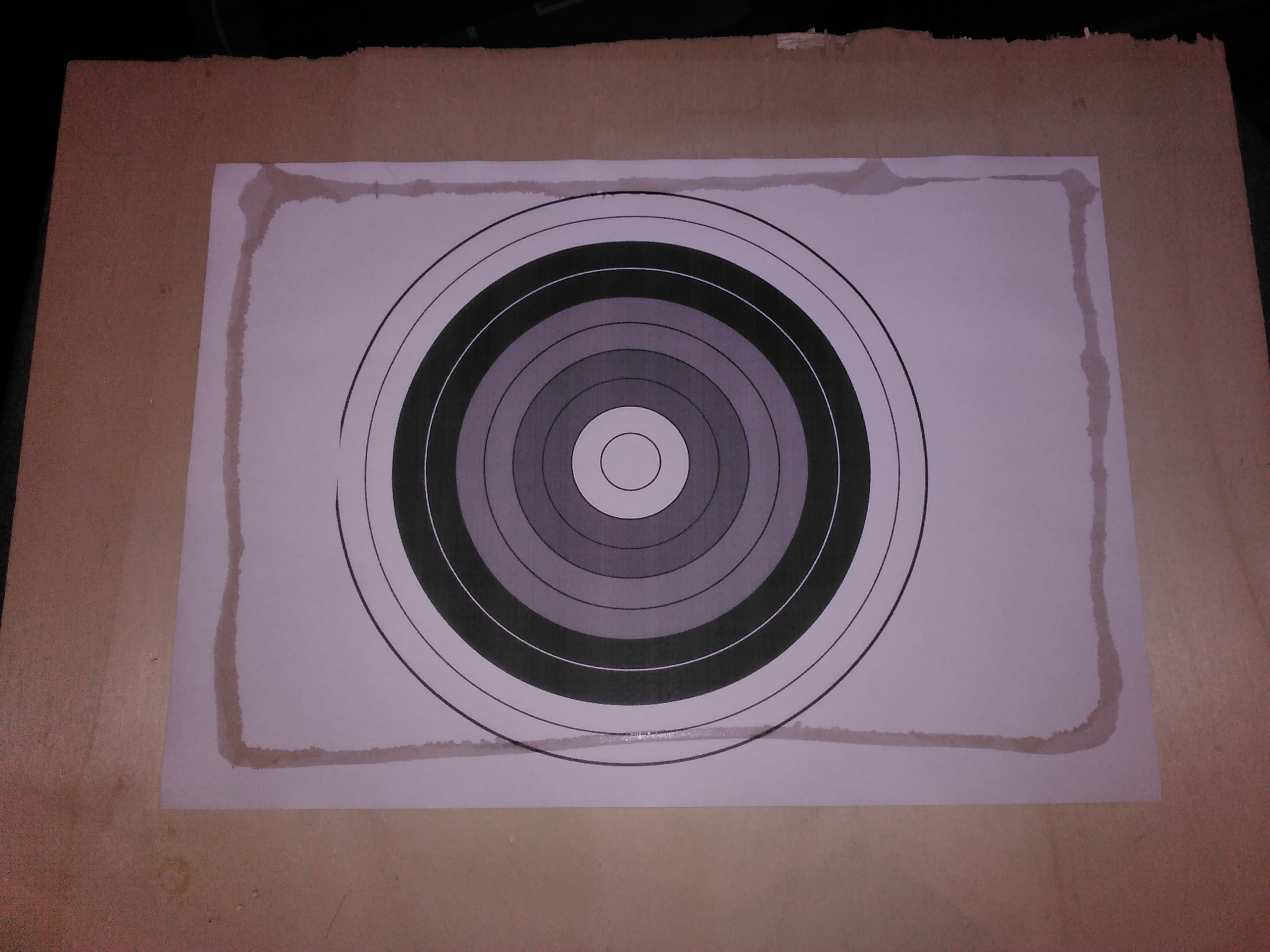 - Mon Oct 08, 2018 5:45 pm #78520 I am late, but there is a reason:
I need one hand for up/down stick and the other hand for left/right/forward/backward stick of drone transceiver.
I simply miss a 3rd hand needed to press return key of mobile Pi wireless keyboard

So I wanted to replace the mobile Pi by another ESP01s running MicroPython. First I wanted to know whether MicroPython can run a WebREPL websocket client in order to remote control the ESP01s attached to drone. And today I was able to do so, and the code for remote execution of drone ESP01s MicroPython commands is so simple(!), see:
https://forum.micropython.org/viewtopic.php?f=2&t=5351&p=30829#p30829

After the software side was clear I did need 3.3V for the transmitter ESP01s. The step-down converter accepts 5V maximal, so I could not use all 4 AA batteries as input. Instead I did solder cables so that I get 3.3V step-down converter input voltage from 3 of the 4 AA batteries. Most importantly I did need a micro button at a place that a finger can easily press while still controlling both transmitter sticks. That was all that was needed, here is the connection diagram (1853 byte share URL for edit): 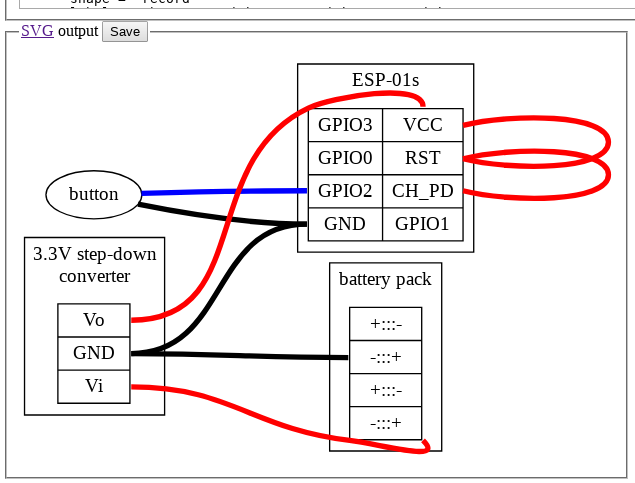 After soldering and first functional test I did superglue the step-down converter, the ESP01s connectors and the micro button to the transmitter. This is the result: 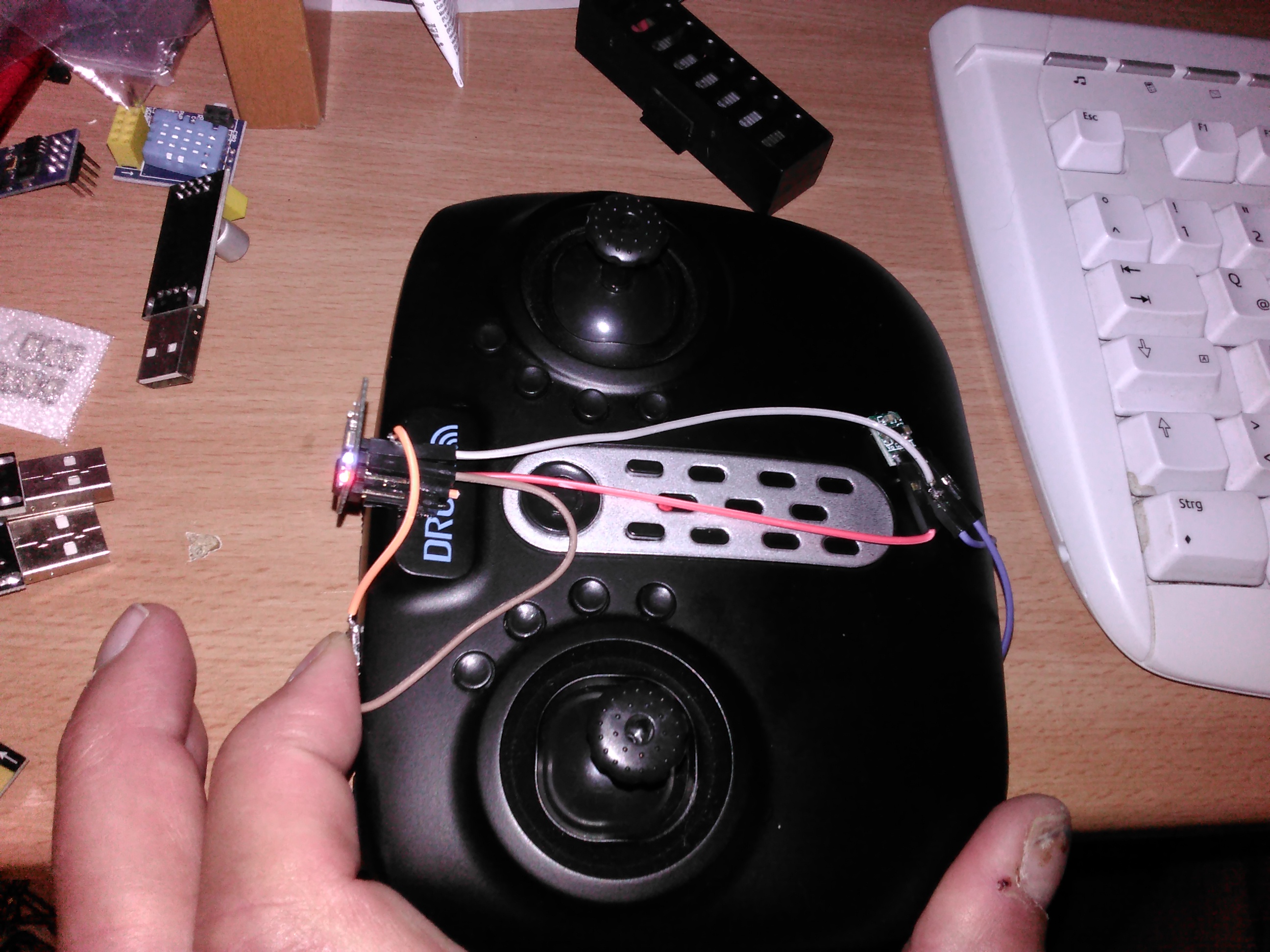 In the photo I did a second functional test, set built in LED value to value read from micro button. I pressed the button, therefore its value was 0, and therefore built in LED is lit because of reverse logic.

This was the test script used via weplrepl_client.py connection to the transmitter ESP01s:
Code: Select all$ webrepl_client.py 192.168.178.122
Password:

Later:
Now that there is a full OTA WebREPL connection between transmitter and drone ESP, more complex projects can be attacked [after doing (hopefully) the lost in trees drone and lost plane rescue part by dropping payload on them from above]
Reply
Return to ESP8266 Videos

Yes but note that the method of passing id and pas[…]

Hello everyone, If I post here today it's because […]

Hi. I'm looking for easy to use and free iot softw[…]

The display of the following software has been con[…]

The library Base64 Base64 decode example by Art[…]

I'm trying to get this project working https://git[…]

In this video you can find some useful examples in[…]

does it automatically disconnect for upload?

there is an option to set the switches to connect […]

OK! I've found the solution. there was a mistake i[…]

I do not manually disconnect/reconnect to wifi. I […]

Hello Currently i using a dedicated linux based A[…]